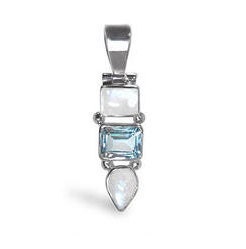 And it is the modern June birthstone and the gemstone for Aquarius.

Iridescent rainbow moonstone: radiant with the "light of the moon", this lovely feldspar is white with flashes of blue and rainbow light and derives it's moon name from its blue-white sheen.

It was once thought that the gem's luster waxed and waned just like the moon itself, and moonstones have always been used in jewelry by moon worshipers. Moonstones are generally set in silver, which brings out their characteristic bluish-silvery sheen.

The Romans thought that the wearers of moonstone would receive wisdom, wealth and success in battle.

In India, the moonstone is believed to bring good luck and is considered sacred.

Moonstone is claimed to be the gemstone for lovers as it symbolizes passion.

It is said that it enhances our ability for empathy and understanding and is believed to bestow the power of clairvoyancy.