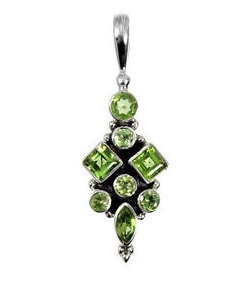 Peridot is an ancient and yet currently very popular gemstone, and is the modern August birthstone.

SEE ALL OF OUR PERIDOT GEMSTONE JEWELRY

It is so old that it can be found in Egyptian jewellery from the early second millennium BC. The early Egyptians claimed that peridot glowed by night but was invisible by day. 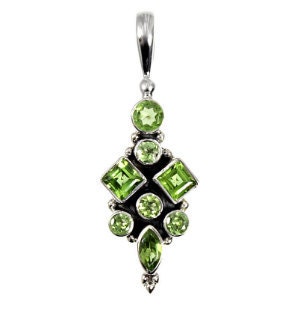 In the Middle ages, peridot was believed to dispel the darkness and terrors of the night. King Edward VII wore a peridot for good luck. For centuries, peridot was found on the island of Zabargad, known as the "serpent isle" in the Red Sea. According to Greek legend vicious snakes lived on the island, guarding the precious stone and killing anyone who dared approach it.

Today, peridot is found in the USA, Norway, Ethiopia, Pakistan and even in the Antarctic.

The peridot gemstone is of a green color that is special among all gemstones and it has been said that it "shimmers like damp moss in the fall sunshine".

Peridot was once known as the “Evening Emerald” and the beautiful green color of peridot gemstones made them the favorite gem of the Baroque period.

Peridot is said to bring healing and vitality to the whole body.